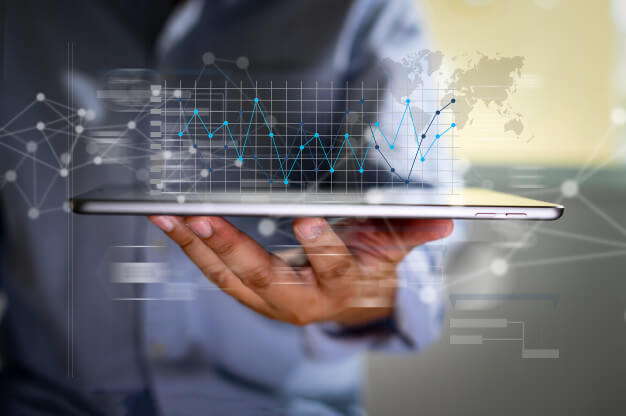 IT outsourcing (ITO) is gaining more power in the business world year by year. Over the last 10 years, the ITO market has adapted to many significant events. Moreover, in 2020, we entered a new era of business relationships due to the global pandemic. The end of the 2010s marked a significant moment for IT outsourcing industry. Today, businesses should analyze the current state of the ITO market to make decisions such as where to outsource and which ITO vendors to choose.

The last two decades both ended with disruption and global challenges, requiring many enterprises to make risky decisions. The global financial crisis from 2008 to 2009 and the coronavirus pandemic that began in 2019 transformed the IT market. To see how these events have impacted today’s outsourcing market, let’s consider what ITO services looked like in the 2010s.

Amid an economic slump, global unemployment rates skyrocketed, and many employees had to agree to lower wages and reduced working hours. In the US, job growth stagnated in 2008 and then faced an impressive drop in 2009 and 2010. This influenced the IT outsourcing market worldwide. 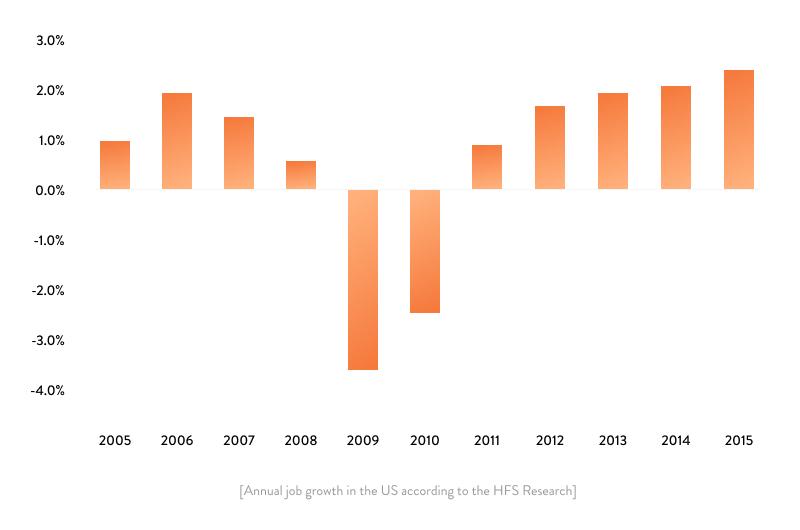 In particular, at the beginning of 2009, Central and Eastern European IT outsourcing markets experienced a 15 percent to 20 percent decrease in contracts compared to the same time in 2008.

A Forrester study on IT management in 2009 revealed that:

But even the darkest night will end and the sun will rise. And so it happened with the ITO market, which began to gradually revive in 2011.

However, hesitation about outsourcing was still strong. According to 2011 HFS research, 39 percent of 347 buy-side organization representatives said that the major factors stopping them from outsourcing were unclear service provider capabilities and indefinite long-term business benefits.

What influenced ITO market growth over the years

The evolution of the IT outsourcing market has been influenced by global economic trends, recessions, and emerging technologies. However, the ITO remains one of the most popular global business relations.

Most popular ITO destinations over the last 10 years

To analyze and compare the most popular ITO destinations over the last 10 years, we’ve investigated AT Kearney reports from 2011, 2014, 2016, 2017, 2019, and 2021. Kearney is an American consulting firm that produces an annual Global Services Location Index (GSLI) that defines the best offshore and nearshore destinations for ITO and BPO (business process outsourcing) services.

With growing demand for ITO and BPO services, the number of countries in the GSLI reports increased from 50 in 2011 to 60 in 2021.

AT Kearney’s rankings are based on the following criteria:

In 2019, Kearney researchers added one more criterion — digital resonance, which includes digital skills, legal and cybersecurity performance, and corporate activity — due to the rapid technological progress since 2017.

Based on all of these criteria, India, China, and Malaysia have been the top three outsourcing destinations since 2003. However, if we consider each criterion separately, the results may be surprising.

The first and most prominent factor that impacts the overall GSLI score is financial attractiveness, referring to compensation costs, infrastructure costs, and tax and regulatory costs.

Let’s take a look at the table below to see which countries are leaders when it comes to the costs of ITO services.

We can see that Sri Lanka has been on top since 2016. In 2014, Bangladesh was added to the GSLI list and took first place that year.

Surprisingly, India was never the leader in terms of financial attractiveness. Indonesia and Malaysia, which are leaders in the overall GSLI score, also lag when it comes to financial benefits.

Outside of Asia, it’s notable that Ukraine has surpassed many other European countries in financial attractiveness, even taking third place in 2019.

The least attractive countries in terms of the financial aspect of outsourcing have been the US, the UK, Australia, Canada, Ireland, Germany, France, and Singapore. However, the situation changes significantly once we consider the second criterion: people skills and availability.

Let’s have a look at one more table showing countries with the best scores for ITO/BPO experience and skills, language skills and education, and workforce availability. 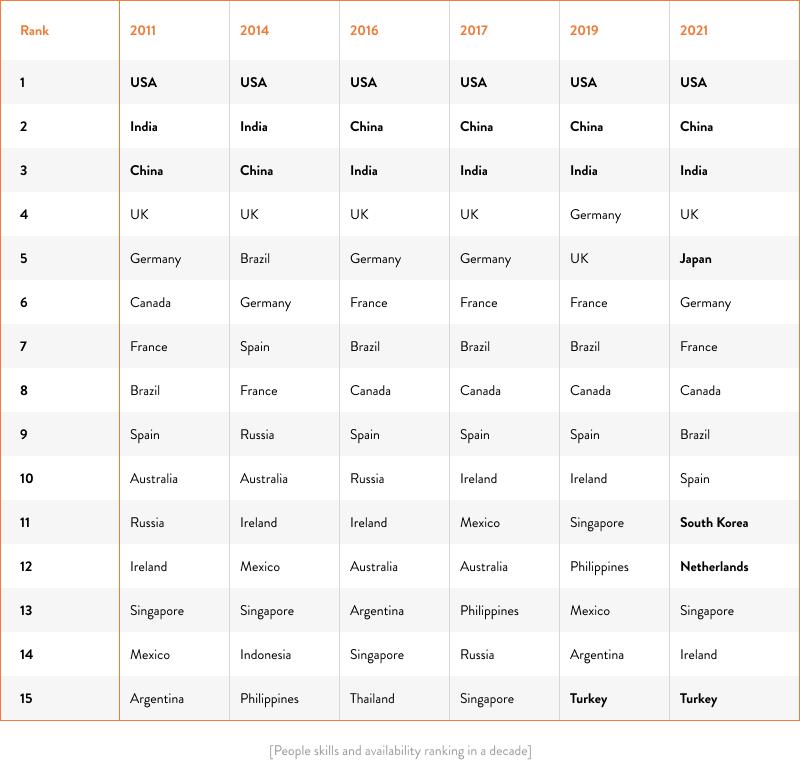 The USA, China, and India have been leaders in people skills and availability for the past 10 years due to high English proficiency, strong education, and vast talent pools (the latter refers more to India and China).

Looking at positions 4 through 15, we see that many countries that aren’t attractive financially are among the best in terms of people skills and availability.

It appears that Singapore has the most favorable business environment for delivering ITO and BPO services. Lots of Eastern European countries also fall into this category, with Estonia being in the top five in 2011 and the Czech Republic remaining in the top 15 until 2019 (in 2021, it took 19th position).

At Yalantis, we stick to the legal best practices enshrined in Estonian and European Union laws and directives, such as Directive 2009/24/EC on the legal protection of computer programs. Find out how Yalantis protects clients’ intellectual property and ensures a safe business environment for collaboration.

With the advance of automation and the eruption of new technologies, a digital resonance factor was included in 2019 and changed the picture of the GSLI ratings.

Taking into account digital resonance only, Asian countries drop in the rating, outpaced by countries in more technologically advanced regions. In 2021, in fact, India takes only 17th position in the digital resonance rating. Asia remains a leader in the overall GSLI rankings due to its significant scores in financial attractiveness, though this situation may change if digital resonance gains ground and becomes a more impactful criterion in the GSLI.

In 2021, we saw new entrants in the GSLI top 10 ranking in digital resonance such as Sweden, Finland, and the Netherlands due to their rapid digital growth and startup activities. However, these countries don’t make it to the top positions in the overall GSLI ranking because of low scores in financial attractiveness, people skills, and availability.

With such an abundance of ITO locations, it’s easy to become overwhelmed. The reason why we’ve looked at GSLI ratings according to different criterion is to help you choose a country based on which criterion is most significant for your business.

If a favorable business environment is a more critical factor for you than the cost of services, then your go-to ITO destination could be Singapore. For instance, Boston Consulting Group outsourced their entire center of excellence to an IT services company in Singapore, and the UPS logistics company outsourced the development of shipment software with package tracking features to a Singaporean IT company.

But if you want to make a balanced decision between cost and digital resonance factors, then Eastern European countries could be the most suitable for you.

In particular, Ukraine was among the top 25 ITO countries from 2016 until 2019 (2021 changed the picture, as more countries were added) and has a great balance regarding cost and digital skills. As per the 2021 digital resonance ranking, Ukraine outperforms India, the Czech Republic, Bulgaria, Lithuania, Latvia, Poland, Romania, and a few more countries in terms of digital skills.

Let’s focus now on the current situation in the IT market.

Team TechieMag - Modified date: February 1, 2022
Business
Did you know that Americans spend up to 23 hours per week (on average) either online or texting? That's right. If you're not on...

Choosing Between Free Antivirus And A Paid One: What’s Better?