Home Applications Hacker Who Modded Calculator To Access The Internet Gets DMCA Notice From... 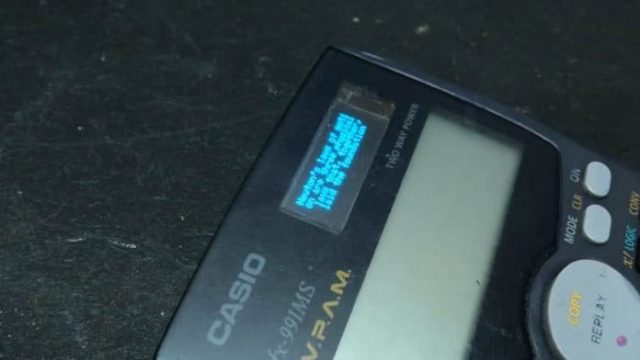 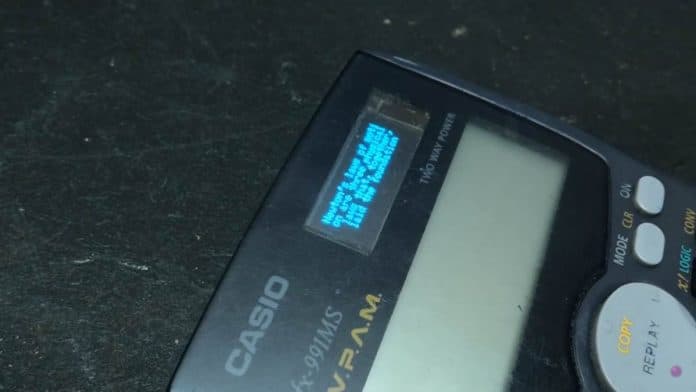 Hobbyist electronics hacker and YouTuber ‘Neutrino’ has been slapped with a DMCA copyright complaint by CASIO for using its copyrighted source code for his project, reports TorrentFreak.

For those unaware, earlier this month, Neutrino had hacked a Casio fx-991MS scientific calculator and replaced the small solar panel on the device with a tiny OLED screen, added an ESP8266 Wi-Fi module, a rechargeable battery, and even a messaging functionality without modifying the physical appearance of the calculator. What’s more, the device was also able to communicate with similar devices nearby.

The cleverly added electronics can be used to fetch pre-uploaded data from the mobile development platform, Firebase, which could be anything from mathematical formulas to laws, sentences, quotes or anything that could potentially be used to cheat in exams, as highlighted by Gizmodo in an article published on Neutrino’s invention.

According to TorrentFreak, Neutrino wanted to do something really exciting to keep him busy during the lockdown.

“Since we were in lockdown I wanted to do something really fun, which can keep me occupied for a week or two,” Neutrino informs TorrentFreak.

“I did not have many components to work with so using this calculator (CASIO fx-ms991) was not a problem, because it was roughly 5+ years old and it was given by my uncle.”

He also stated that he hopes that the hack motivates others to learn and participate in the ‘maker community’.

However, Neutrino’s project has not gone down well with REACT, an anti-counterfeiting organization working for CASIO, which has high-profile companies such as Apple to Yves Saint Laurent and more, as its members.

REACT defines itself as a not-for-profit organization with over 30 years’ experience in fighting counterfeit trade. “One of our main objectives is to keep the costs of anti-counterfeiting actions affordable,” its site reads.

This week, REACT wrote to GitHub, where Neutrino has his ‘Hack-Casio-Calculator’ repository, with a demand that it should be completely taken down for infringing its client’s intellectual property rights.

“I am writing on behalf of CASIO, which is a member of REACT (also known as the Anti-Counterfeiting Network). REACT actively fights the trade-in counterfeiting products on behalf of its members,” the complaint reads.

“It came to our attention that the below-mentioned repository is using copyrighted source code in order to modify Casio’s copyrighted program.

“The code the repository contains is proprietary and not to be publicly published. The hosted content is a direct, literal copy of our client’s work. I hereby summon you to take expeditious action: to remove or to disable access to the infringing content immediately, but in any case no later than ten days as of today.”

You can read the complete DMCA notice submitted to GitHub here, which claims that the “entire repository is infringing” and that hosted content is a “direct, literal copy of [CASIO’s] work.

In response to the complaint filed, GitHub has disabled the repository endorsing the notice’s claims is not forthright. However, Neutrino informs TorrentFreak that the claim is rubbish and that he has written the code for his project entirely from scratch.

“They accuse me of using copyrighted source code in order to modify CASIO’s copyrighted program. But my code has nothing to do with it,” he explains.

“The code was written completely from scratch and all the libraries included in my source file were open-source. Everything was clearly mentioned in the [now removed] readme file of my GitHub repository. They also allegedly accuse me by stating that ‘The entire repository is infringing’, but in reality whatever the original content they pointed out has nothing to do with my code.”

Neutrino has already filed a DMCA counternotice with GitHub to get his project back.

Best Alternative Of Animeflavor In 2022

Hannah Noah - Modified date: January 1, 2022
Entertainment
Animeflavor reddit is a prominent website for watching online anime with a large audience. Animeflavor contains data from thousands of anime heroes and has...

Online Learning Tools to Help You Acquire a Skill This Summer

How to Set Bing’s Daily Photos as Wallpaper on Android –...