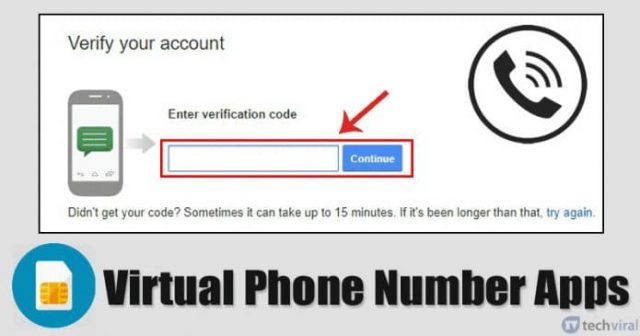 Phone verification is indeed helpful for tech companies as it prevents spam and misuse. However, there are lots of users who don’t want to put their private number on any online sites. You can use your phone number to verify online accounts, but what if your number is being misused?

Actually, few companies on the internet collect and sells phone number to third parties. This is the only reason, users often receive spam and telemarketing calls. These things can be easily avoided by using virtual phone number apps.

This app also provides the virtual phone number for the verification processes. It’s one of the top-rated communication apps where users get their own unique US phone number which can be utilized for various purposes. There is only one issue that has been noted, this app is sometimes reported as spam by Google services or accounts. That means it won’t work while creating Google accounts. Other than that the app is all well for every other type of account verification!

This app registers a free US virtual phone number for every user who signs up. The registration could be done through email ID and once done, users can start making and receiving calls. Apart from calling, Talkatone can be used to exchange text messages as well. However, the pricing of the talkatone services are quite expensive compared to other apps.

Well, Burner is a premium app on the list which allows users to choose their own unique phone number. The app offers phone numbers from about 40 countries which can be used for verification purposes. However, you need to pay $1.9 for every phone number that you purchase from the app.

As the name of this app already suggests, this app is meant for providing a virtual phone number that the users could use anonymously to verify their accounts. This app is amazing because it doesn’t give away any information about you to the third-parties. So, Hushed Anonymous Phone Numbers is another best Virtual Phone number apps that you can use right now.

If you are living in the US or Canada and searching for apps to get a virtual phone number, then 2ndLine might be the best pick for you. With 2ndLine, you can easily get a local phone number which you can give your friends. 2ndLine is basically free on US & Canada, but for international calls, you need to purchase the premium package.

Well, if you have been searching for a flexible and personal communication app for your Android to reach out to customers or team members, then Sideline might be the best pick for you. With Sideline, you can create your own custom number. To create a custom number, you can search area codes to find a second phone number for your company or small business.

This app is pretty much similar to the 2ndLine app that had been listed above. On this app, you need to pick a free U.S. phone number in any area code to start making calls and receiving SMS. Apart from that, Telos also has lots of calling and texting plans to choose from.

Well, Skype number is not actually an app, but its an addon on the Skype service. Skype Number is available in more than 26 countries/regions. Users can choose from 26 different countries/regions to buy a Skype Number. Once purchased, users can share the skype number with friends, family, and other contacts to make and receive calls.

So this was the list of all those best Android apps which are meant for the phone number verification using virtual techniques. If you know any other such apps, let us know in the comment box below. I hope this article helped you! Share it with your friends also.

How To Change the Height & Width of Windows 10 Taskbar...